URA board approves TREK for housing project in East Liberty 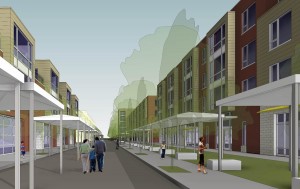 The board of the Urban Redevelopment Authority of Pittsburgh voted to choose TREK Development Group to build a new affordable apartment development on the Mellon Orchard’s South site in the heart of East Liberty.

The board decided to enter into exclusive negotiations with downtown-based TREK to sell the company a 2.96-acre site at North Euclid and Station Street. The URA chose the developer for the city-owned property in conjunction with a tenant group of Penn Plaza residents, who are slated to lose their apartments in the nearby apartment complex as it faces redevelopment. The tenant group was included in the selection process by the administration of Mayor Bill Peduto as part of a larger agreement between the city and Penn Plaza owner LG Realty.