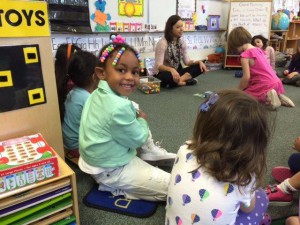 Last spring TREK collaborated with the Campus School at Carlow University to make early childhood education scholarships available to our Dinwiddie Street Residents. A letter was sent inviting residents to participate and this August two preschool age girls started in the Campus School. Dinwiddie Street resident, four-year-old Christina had been attending a local community preschool along with her three-year-old brother but when her mother, Sophia, learned about the scholarship for the Campus School, she couldn’t pass it up. Knowing the great reputation of the school, the diverse student body, faith component, and its close location to her home it seemed like a great place for Christina and “I wanted to make sure she has a really good start”, said Sophia.

Sophia, a small business owner and mother of four, knew that she would have to make some adjustments to her schedule to get the most of the program. She changed her morning routine and she has committed to making arrangements in her work schedule to volunteer in Christina’s class- she’s planning on being a Mystery Guest Reader later this year. To Sophia, those adjustments are worth it, “I love that they love to teach Christina and they want us to be involved”.

Christina loves her new school too. She likes to color at the art center, read classroom books, and walk through campus to gym class. Christina has made new friends at school and particularly enjoys playing castle with them at recess. Before dinner each night, Christina now pauses to say a prayer she learned in school and can’t wait to share her daily adventures with her family. Since attending the Campus School, Christina doesn’t just want to watch TV anymore, now she wants to talk with her family, ride her bike, or explore the outdoors looking for leaves.

Recognizing the positive impact this opportunity has had on Christina, Sophia hopes to enroll her other children in the Campus School at Carlow University and would encourage other Dinwiddie residents to do the same.