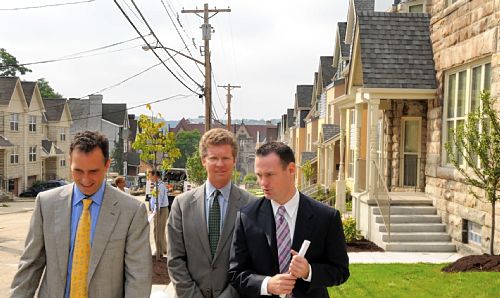 Shaun Donovan, the U.S. Housing and Urban Development secretary, picked the neighborhood to showcase Project Rebuild, a $15 billion sliver of the administration’s $447 billion bid to right the economy. His immediate audience was a small group of aides, reporters and neighborhood activists, but the ultimate target was Congress.

“Congress needs to get back to work, so that the American people can get back to work,” Mr. Donovan said, after outlining Mr. Obama’s proposal, which has received skeptical responses from Republicans, who control the House. “These aren’t Democratic or Republican ideas. These are American ideas,” he said.

“We need this bill now,” said Mayor Luke Ravenstahl, who joined the Donovan tour. “We need members of Congress to knock it off, to stop the bipartisanship and to understand that their failure to act is impacting normal people … and is hurting communities like this one that has so much happening.”

U.S. Rep. Mike Kelly, R-Butler, said Congress won’t act hastily. “While the president promises great things with this new stimulus bill, let’s not forget that the president promised the American people that the $800 billion stimulus bill he pushed in 2009 would keep unemployment below 8 percent” but has instead exceeded 9 percent, Mr. Kelly said in a written statement.

The act was outlined in Mr. Obama’s jobs speech to a joint session of Congress last week. The president pitched it again Wednesday in Apex, N.C., and Cabinet members have been fanning out across the country, urging people to contact their Congress members to demand action on it.

Mr. Donovan said the act would lower payroll taxes for 98 percent of businesses; prevent or reverse 280,000 layoffs of teachers and first-responders, including 14,400 in Pennsylvania; rebuild 35,000 schools; and pump $50 billion into infrastructure investments picked on merit, not politics. Employers, he said, could tap a $4,000 tax credit for each person they hire from the ranks of the long-term unemployed.

Mr. Donovan said the act “won’t add a dime to our deficit.”