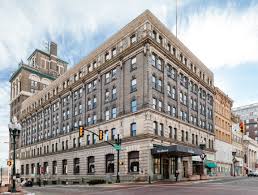 A Pittsburgh developer is preparing to move forward with its ambitious plan to rehabilitate the Washington Trust Building into a mixed-use facility now that it finalized the purchase of the historic building at South Main and East Beau streets.

TREK Development Group purchased the building Nov. 15 for $739,844, according to county property records, and is preparing to turn the towering structure in Washington’s main business district into a mix of commercial units and residential apartments by January 2016.

Trey Barbour, a project manager for TREK, updated the construction timeline to Washington City Council during its Monday workshop meeting as the developer continues to work to secure financing and begins relocating current business tenants to other parts of the building.

The company wants to begin construction next January with the renovations taking about a year. The total project to convert several floors in the building, install new infrastructure systems and improve the exterior facade is expected to cost about $19 million.

The developer wants to remodel the building from the third to sixth floors to add 44 one- and two-bedroom apartments.

“Hopefully, two years from today, everything will be shiny and new again,” Barbour said.

Barbour said the remainder of this year will likely be spent moving businesses most affected by construction. Although Barbour said he expects some “attrition” from the disruption, he thinks they’ll be able to accommodate the majority of tenants by moving them far from the construction zones.

“That is much-needed foot traffic to help patronize the businesses we already have,” Davis said. “I think bringing more people down here to live can even help encourage other businesses to bring in more housing – maybe loft apartments – above their shops.”

Apartment rents would average about $750 a month for a one-bedroom unit, TREK officials previously said, but some units would be priced at $650 a month for people earning $30,000 a year or less. Rent for a two-bedroom unit would be about $950.

The project still has many hurdles to clear and Barbour acknowledged the developer is still working to secure enough financing to begin the renovations. The developer requested $750,000 in local share account money last January, but was bypassed for other projects. The project has not requested any LSA money this year.

Still, Barbour said TREK can relocate or even attract new tenants while continuing to work on the financing. He said the building is currently 60 percent filled, meaning there is plenty of room to move those who would be impacted by construction.

“It hasn’t been sustainable for a while,” Barbour said.

The building currently has 84,000 square feet of leasable space.

The main section of the structure was built in 1902 before construction of the 10-story annex along Shaffer Avenue in 1922.