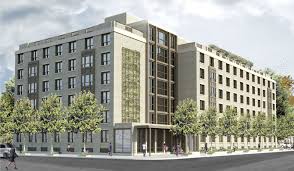 The fiscal backing opens the door for the sale of $692,279 of Low Income Housing Tax Credits to investment circles. The project also received $750,000 from PennHOMES.

The housing project is estimated at $7 million to $9 million. It will involve restoration of the five-story former G.C. Murphy Building at 5 Market St., demolition of adjacent blighted structures at 13-21 Market St. and ground-up construction of a four-story building along Market Street in what is popularly called the “Neck.” Demolition is expected to start by year’s end and construction in the spring.

“This is a shot in the arm for us. Hopefully, it will spur bigger and better things,” says James Lawver, council president. “This is going to increase the value of the next building and the next building and so on. Investors will be able to see that things are happening in the downtown and will want to get in now.”

The development site is across the street from the Bank Street parking lot and a stone’s throw from the Snowdon Square lot and proposed urban park, an award-winning idea that began with the Students in Action team at Brownsville Area High School. The Redevelopment of Authority of Fayette County is poised to advertise for bids for the park project. Meanwhile, the Brownsville Free Public Library also has a major expansion project on the drawing board. And, borough council has just approved “exploring” the option to create a municipal complex in the Market Street block bounded by Brownsville Avenue and Brown Street, which currently houses two long shuttered banks and a boarded-up apartment building and restaurant.

Competition is stiff for the funding, which is pursued by developers statewide for projects similar to Brownsville’s. Last year, TREK’s proposal didn’t make the final cut so this cycle’s final decision was anxiously awaited by all parties. Gov. Tom Wolf announced the news a few days ago, awarding $36.9 million in tax credits and $12.5 million from PennHOMES for the construction of 39 affordable multifamily housing developments statewide.

“Low-income housing tax credits work because they leverage investment by the private sector to make affordable rental housing possible,” the governor said. “This is an example of the public and private sectors working together to produce outstanding end results for Pennsylvanians.”

The Brownsville project includes street-level retail space, a residents’ community room and 24 apartments throughout the two buildings plus green space and residents’ parking.