‘A symbolic beacon’: Lighting of Garden Theater sign a signal of the North Side block’s revival 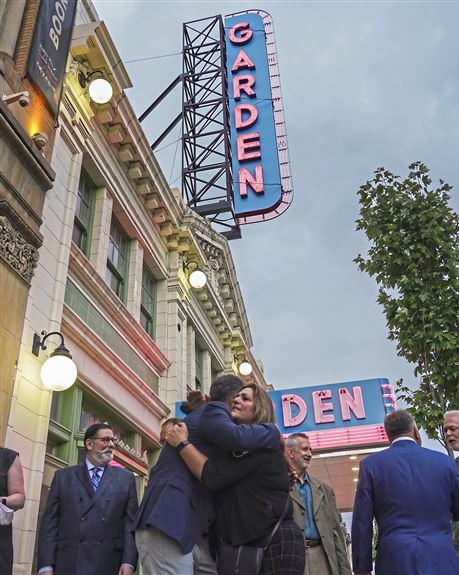 ‘A symbolic beacon’: Lighting of Garden Theater sign a signal of the North Side block’s revival

"This is one sign of the times that many North Siders are embracing.

Dark for years, the sign, which spells out “garden” and sits atop the Garden Theater on West North Avenue, surged back to life Wednesday, representing a symbolic and literal renewal of the block’s fortunes.

The sign had been a neighborhood landmark for decades before it was removed for safekeeping in 2013 while the theater’s terra cotta facade was restored.

Wednesday’s ceremony marked a celebration of the block’s ongoing restoration, one that has been decades in the making.

Held in conjunction with the lighting ceremony was the groundbreaking for the final piece of the rehab effort — an apartment complex at the corner of West North and Federal Street being advanced by Trek Development Group and Q Development.

For Maggie Connor, board president of the Allegheny City Central Association, the sign’s relighting stands as “a symbolic beacon” of the block’s renewal.

“It feels hopeful for the first time in a long time,” she said. “There’s a very clear path forward. It’s full steam ahead.”

For years, the theater, built in 1915, served as a movie house for North Side residents. In 1973, it began a more notorious run as an X-rated movie venue.That continued for more than 30 years until the Pittsburgh Urban Redevelopment Authority acquired the property after a lengthy legal fight that went all the way to the Pennsylvania Supreme Court. That proved to be only part of the battle to restore the block. The effort encountered more than a decade of delay spawned by lawsuits, changes in developers and other obstacles."